I've always liked to use my website to test out new technology. Recently I stopped hosting a few external sites for friends and family, which closed down my revenue stream to cover hosting charges. I was only paying $45 a month, but that adds up over a year. I needed a cheaper option to host brettmorgan.net.

Enter Docker Cloud. I've been using Docker on and off for about a year now. In my day job we successfully rolled out a UI regression testing framework using Docker. Now I could have set up Docker on my previous hosting provider, but that wouldn't saved me any money. Plus I wanted to give Docker Cloud a try.

Docker Cloud is a framework to automate the process of deploying your environment in the cloud. After a bit of research I was able to successfully migrate brettmorgan.net in one night.

Here's what I did.

First thing you need to do is set up a Node. A Node is the server that will have docker installed on it and will hold your containers. With Docker cloud you can have many nodes, but for my simple site I have one. The easiest way to get a node is to point Docker Cloud to a cloud provider that you already have an account with.

Since I was trying to do this on the cheap, I set up a $5/month account with Digital Ocean. I then went into Docker Cloud and filled out a simple form to create a node. This created a small server for me at Digital Ocean, it was all automated, very nice!

Now that I had a node, I wanted to create some services to run on it. Turns out services are just docker containers, with some extract features to link services together.

I played around with setting up a Ghost container, and an Nginx container, and basically got every thing working, all without creating my own custom Docker images. I was able to use some plain images on Docker Hub and just configure them with some environment variable and volume mappings. I did this all from the Docker Cloud UI.

This was great, but there was another feature of Docker Cloud I wanted to try out, Stacks.

I wanted a change a few of my services and add my another service to my node. Rather then do this all manually through services, I decide to use the Stack feature in Docker Cloud. My understanding is that is a lot like Docker Compose (I have used so, I can't really make comparison).

The idea of a Stack is that you create a Stackfile, that specs out all your services. Then you just start your stack and all the services come up. I was really easy to set up a stack file with all the services I needed.

Here is my stack file with private stuff changed. 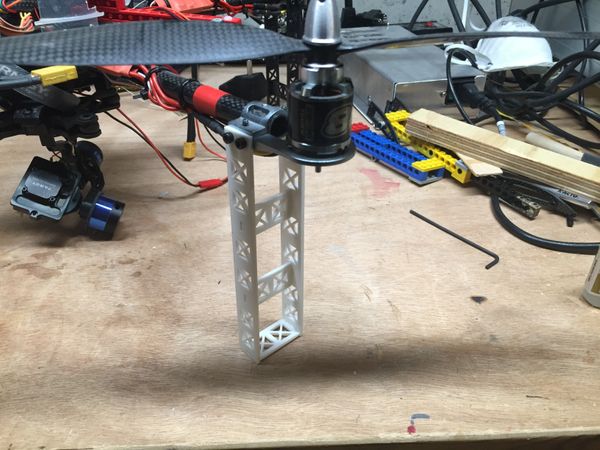 My quadcopter has been collecting dust for about a year because of broken landing gear from a hard landing. I decide last weekend that it was time to fix that. I'd been using